Part Two of the Brief History of the Toronto Diocese: Riot

On September 24, 1875, a strange petition was presented to Toronto Mayor Francis H. Medcalf. A group of concerned citizens had seen an ad in a local newspaper, the Irish Canadian, describing an intended Catholic procession through the city that was set to occur on Sunday, September 26. Catholic processions had long been an object of scorn among Toronto’s Protestants. There is, for example, George Brown’s description of a “romish” procession he witnessed in Montreal in 1852, where he saw “the melancholy spectacle of crowds kneeling down on the street and worshipping an eye carried on the end of a stick, to represent the Almighty, and the host, or the alleged living reality of Our Savior, carried in a box.”[1] The signers of this petition expressed dismay over some of the terms they saw in the ad’s description of the procession: there was to be “Music”, “Bands”, ”Singing”, “Bishops”, “Thurifers”, “Acolytes”, “Priests”, “Deacons”, “Copes”, “Dalmatics” and more- and on a Sunday, to boot. Clearly, this event had to be stopped, or at least limited. The petition asked the mayor to put a stop to the procession, music and banners, but not to interfere with the orderly and quiet attendance of religious duties.


Mayor Medcalf sent the petition to Archbishop Lynch, along with some advice: “I would respectfully suggest for you consideration the advisability of well considering the consequences that are likely to arise from the same.” Archbbishop Lynch responded through the rector of the Cathedral: “We intend to proceed to our cathedral and attend the religious ordinances of our Church tomorrow in the manner expressed in the petition, viz: “Quiet, peaceful and Christian.”"


The procession that aroused the fear of the mayor and the petitioners was in celebration of the Opening of the First Roman Catholic Provincial Council in Toronto. The events themselves became connected to the Jubilee Year of 1875. That year had been declared a Jubilee Year by Pope Pius IX, and as such was to be marked by special celebrations and also special Jubilee indulgences. As Archbishop Lynch explained in a letter to the faithful: they could gain “full remission of all temporal punishments due to your sins after you will have obtained forgiveness for them in the sacrament of penance.” One of the conditions was fifteen visits or pilgrimages to parish churches or the Cathedral to pray for special intentions. The Archbishop asked the faithful of Toronto to visit four churches (their parish, the cathedral and two others) fifteen times. The pilgrimages began in July and continued into September. One pilgrimage, the pilgrimage of St. Paul’s, St. Basil’s and St. Mary’s were also scheduled for the same day as the procession marking the opening of the council. The procession for the council - the one the petitioners wanted stopped and the Mayor feared the outcome- began at about 10 c’clock in the morning and proceeded quietly from St Vincent’s chapel to the Cathedral via Church and Shuter streets. No problems were reported, there were no banners and music, as the Bishop had promised. There were few witnesses to the procession, because the protesters made a mistake and went to the second procession. For this reason the events that were about to unfold became known in Toronto’s history as The Jubilee Riots.


This procession was made up of about 1000 members, many of them women. They had a small banner of the Immaculate Conception and a crucifix at the head. They proceeded from the Cathedral along Queen St. to Dummer St. to St Patrick’s chapel. A throng of people accompanied the procession and hurled insults at the pilgrims. The situation became more tense, and the scheduled route of the procession- along Queen St. to St Mary’s at Bathurst St. was altered to Spadina Ave. The situation was a powder keg waiting for a spark, and sparks came. Police broke up a small altercation at Dummer, where insults lead to rocks being thrown. The police took up positions at Spadina, where another large crowd had gathered. The priest leading the procession asked the police to intervene. The police formed a line to separate the two parties, and became targets for stones thrown from both sides. They pushed the mob back down one of the streets, allowing the women pilgrims a chance to escape along Queen to Bathurst.. Rocks and other missiles were thrown by both sides. At St. Mary’s, things got worse, and the police called for reinforcements. More fights, more rock throwing occurred. The pilgrimage broke up. The women ran for cover, while the men continued to riot. The police drew batons, and charged, and eventually the riot was dispersed. Here would be the end of the story, except for one small detail: another Jubilee procession was scheduled for the following Sunday.


The week in between lead to furious public debate, at the level of city council and down to the pubs. The Orange Lodge, predictably, condemned processions on the Lord’s Day. The Newspapers generally condemned the rioters, and admitted that the procession itself was peaceful, yet the Catholics could not be held blameless, and in the words of the newspaper The Leader, the leaders of the Church “could not have adopted a more effective mode of bringing on a row.”[2] The newspapers fanned the flames by printing rumours that Fenians were coming to the new procession for the purpose of causing trouble. Meetings were held at St Lawrence Hall on Oct 1. Speakers feared bloodshed, or a Popish plot for world domination, and everything in between. Many suggested a compromise, by which the Catholics would give up all processions, and in return they would not get beaten up for having processions. Ideas were bounced around, trying to find a way to stop the procession, but in the end, there was no way to stop anyone from walking the street any time they so desired. The procession would occur. Some speakers expressed the fear that this would be like waving a red flag in front of a bull, and more than that, they feared that this time the rioters- both the Catholics and the Protesters- would come armed. They were right on both counts.


The Archibishop, for his part, wrote to the pilgrimage parishes, and ordered the pilgrims not to carry arms, or throw stones, or otherwise fight on the procession, under the penalty of losing all indulgences and benefits to be gained from the Jubilee. In a move unthinkable just fifteen years earlier, he ordered the pilgrims to put themselves under the protection of the civil authorities. He consulted with the Chief of Police, altered the route, dropped St Patrick’s from the itinerary, and six companies of the Queen’s Own Rifles, six companies of the 10th Royals and a detachment of cavalry were made ready for action by 1 o’clock Sunday afternoon. The forces of the city were mobilized, for the first time, to protect Catholics.


The procession began Sunday, October 3rd at about 2 o’clock. The procession was of 1,500 to 2,000 men, with women and girls following along the sidewalk. It quietly went from St Paul’s to St Michael’s. A crowd of 6,000 to 8,000 waiting for the procession at the Cathedral groaned as the procession came into view. They also hissed the arrival of a police detachment. The procession filed into the Cathedral. Archbishop Lynch appeared on the scene, and told the crowd present that all the Catholics were now inside the Cathedral, and suggested the crowd should disperse and go home. They didn’t.


The procession emerged from the Cathedral about ten minutes later, and proceeded to Church St. and down Church, lead by twelve policemen. It was there that the first stones were thrown. At first the Catholics did nothing. As the procession neared Queen St., a new hail of stones fell upon the procession. Then a shot rang out. The fight was on. The pilgrims threw stones in return, and several drew guns and began firing.


Chaos now reigned. Repeated collisions occurred as the pilgrimage inched forward. As a week earlier, the women fled under police cover. The men fought and clashed, were split, clashed again. The procession reached St Mary’s, and the police then helped them escape down a side street. The anti-processionists were unaware of this, and the rioting continued. At one point a rioter suggested the crowd move to St Mary’s and burn the Church down, but were prevented by the police. The rioting continued until the army intervened, and eventually all went home.


The newspapers again had a field day. Once again the rioters were held in contempt. But again, the papers would not hold the Catholics to be blameless. Simply by marching they had been a cause of the riots. The Catholics must have known that, the papers said. Perhaps they even intended it to happen. Aside from the actions of the rioters, all the papers heaped praise upon the police for their impartial interventions in the affair.


The actions of the police constitute a minor miracle. Finally, fifty years after the building of the first church in Toronto, Catholics in Toronto could begin to count on the protection of the Police. Related to this minor miracle was a second one: no one was killed in the rioting. The city was a vastly different place than it was less than thirty years earlier, when thousands of Catholics washed ashore and the only concern of the citizenry was how to be rid of them. There were still strong anti-Catholic feelings within the city, but now, there was also a sense that they too were citizens of the city. They had fought for a place in the life of the city and won.

Update:  The riots as they appeared in the newspaper. 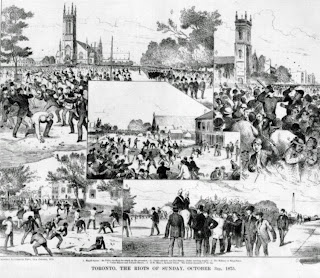 For a fuller article, from which I have drawn heavily, see this site.

[1] . The Globe, 17 July, 1852. This was before George Brown became really anti-Catholic- after which he became more or less reconciled to the existence of the Church. Most biographies of him downplay this phase of his life.

Email ThisBlogThis!Share to TwitterShare to FacebookShare to Pinterest
Labels: Another post most readers couldn't care less about, History, Toronto

Extraordinary Form of the Mass and Other Devotions