This is the altar I will build.

The idea for building an altar came to me a few years back when i was at a party at a friend's home.  In their house they had an altar which they had made from a cork bulletin board hung over a small table.  The board had a few saintly images and prayer cards on it, while a table below held a few statues.  A few oak kneelers- quite nice ones, too, I may add- were placed in front of the altar.  It was the place where the couple knelt and said their prayers together.  As I looked upon this humble place, I thought I, a woodworker by hobby, should use my talents to build such a place for my family.

I believe God requires from us our best.  A place such as theirs would have taken us five minutes to put together. They had no skills in building, (and believe when I say that I am making an observation, not a criticism) as I do, so this was the best they had to offer, but it would not be the best I have to offer. I would build something bigger.  I went online, did a search for "home altars", then revised the search for "Catholic Home Altars", and promptly came up with this photo. 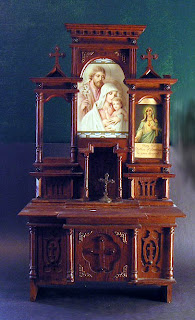 This altar is quite nice to look at, and would be good for our house. The trick to building something like this is not to be intimidated by the whole piece, but rather to look at each element by itself.  Each element, in isolation, can easily be done by someone with moderate woodworking skills.  The columns need only a someone who is competent on a lathe.  The panels could be made by anyone with a jigsaw.  The superstructure is made out of straight vertical pieces and horizontal elements held together by mortise and tenon joints, with a few columns and moulded edges for decoration. If you can saw reasonably straight, plane to a line, cut a mortise and tenon and turn a piece on a lathe, this is within reach. Unfortunately, easy or not, it would take time, and time is not a resource I possess in abundance. After finding the picture, the altar went onto my to-do list and sat there for a while.

Time passed, and I realized that my elder daughter was turning sixteen soon, and if we were going to use the altar as a family, I need to get a move on.  First step was to make some plans.

These are the plans for the altar I will build.

Fortunately, the photo is a straight on view of the altar.  Making a scale drawing of it would be very easy.  i simply traced the picture on onion skin paper, then glued it onto some graph paper.  The squares showed through the paper, thus giving me scale and proportion for the piece. 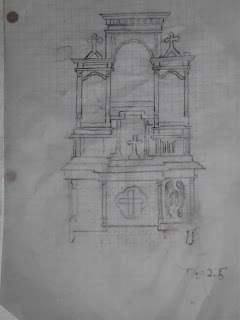 Incidentally,shortly after doing this, I mentioned this method to a coworker, who is also a woodworker, and he said to me: "You do know they have computer programs that can turn any photograph into a set of plans, right?" I may one day speak to him again.

The drawing could give accurate proportions for the, once I had decided on the basic measurements.  Here's where my problems first began.  I had thought to make the lower section of the altar the height of an average table, approximately 28 inches tall. That would make each square three inches tall and wide.  Unfortunately, at that scale, the altar would have been around nine feet tall, and all my ceilings are eight feet.  Okay then, what about 2 and three quarter inches per square?  About eight feet.  Still not good.  So I lowered it to two and a half inches per square, in order to keep the scale simple.  That gave an altar that would fit in my house.  Perfect.  Except the lower section, which I wanted to be about the height of a table, would be about eighteen to twenty inches tall, or about knee height for me. No problem, I thought. I'll build a platform and put the thing on that.

The second problem that came up was wood.

This is the wood I will use to fulfill the plans for the altar I will build.

I needed a fair quantity of a decent wood, and I am, as I have said elsewhere on the blog, white trash.  Fortunately, my job in a shipping and receiving area means that I get many wooden pallets or skids coming through every day, and every now and then a few come through that are made out of some exotic wood which bears a resemblance to mahogany, and may even be mahogany.  I kept a few, ripped them up, and saved them until I had about enough.

﻿
﻿ Were exotic woods common around here, and if money was plentiful, I would simply have bought a pile of wood.  I confess, there are days when I long to do just that.  However, we are on a budget, and the amount I have budgeted for my shop is ten dollars a month.  I am actually bragging a little about that, because I am the only person I know who can run a shop on ten dollars a month.  If I were to hand ten bucks to any of my woodworking friends, they would look at it and like I had handed them so much toilet paper, and ask:  "What the heck do you expect me to do with this?"

Part of the reason why I can operate on this budget is because I am a decent scrounger.  Another reason is because I am forced to find alternatives to just buying my way to whatever it is I happen to need.  And the last reason I can get by on so little money is because of the tools I use.


These are the tools I use to work the wood to fulfill the plans for the altar I will build.

I made a discovery years ago:  old tools are cheap.  Here's some of my collection.

I have many reasons why I use the older tools, and I may write a post on the subject one day.  For now, let me show you what I have done thus far.

Here's the work done so far with the tools which worked the wood that will fulfill the plans for the altar I will build.

With my extremely limited time, I haven't gotten too far along, but I have made a little progress.
﻿
﻿
﻿
﻿
﻿﻿
﻿﻿At any rate, it is began.  I hope to have it done in less than a year, barring any unforeseen circumstances.  Sadly, I have enough experience to foresee that there will always be unforeseen circumstances.  I believe I will be able to post within a month or two with pictures of the lower section complete, and then on to the top.

Lastly, a question for the readers:  Anyone know if there's any protocol or ritual for getting a home altar blessed?

Email ThisBlogThis!Share to TwitterShare to FacebookShare to Pinterest
Labels: Another post most readers couldn't care less about, galoot stuff

Where is your link button

Pardon my ignorance but how does one use a home altar?
That aside; your plans look impressive and I'm sure it will look amazing!

Basically, it is a focal point for prayer within the home.

might I suggest a different style of cross on top of the left and right side icons. A celtic knot cross would go very nicely with the border of the altar cloth I am planning. Just an idea. Let me know what you think

If I were to pay someone, a carpenter, to build me an altar like this one--how much do you think it will cost?


I would love to have one like this built for my home, but I do not know who to hire, or how much I should save for this.

Any advice will help.

Extraordinary Form of the Mass and Other Devotions